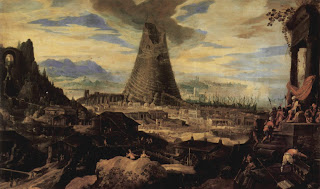 In time out of time, before St Gax wrote down the Law as dictated to him by the Lady, before the tribes of Man came to the lands that would one day be The Empire and the Realm, perhaps before even the Kingdom Under the Mountain had reached its greatest heights (or depths), there was Acheron. Built by black-hearted men near the very edge of the World such that their sorceries could drink from the magic of the Styx, Acheron was the greatest city ever built by men.  It was there that men first heard the deceptions of demons.

What race of man first settled there, no one knows.  In fact, scholars even disagree if there were permanent settlements before Acheron.  It is certainly true that once its vast empire stretched across the whole of the world, few structures were made that did not emulate in some way the architecture of that accursed city.  In this empire there was the seed of the Law, but only as perverted by the whispers of Armadeus and his ilk. Indeed, in those ancient days it was said that Armadeus was far stronger than he is now, and that he made his form known in the World as a well-muscled scholar whose skin, eyes, and even teeth were black as the space between the stars.

From Armadeus they learned the secret names of demons and angels and set them to work. They were the first to construct the sky-ships sometimes used now by the Lazerenes.*  They reached out into the black and found the planets of Fire, Water, Earth, and Air and named them for their heathen gods - false names given to them by Armadeus.  They called creatures out of the Pit and down from the Sky to be their architects. They enslaved all manner of mortals and immortals and did many wondrous and wicked things.

But as all men do, they grew prideful, and sought to turn their magics and secrets of binding against their dark masters, the princes of hell themselves. It is said they imprisoned some, though who and where it is not known, but it was there attempt to harness the power of Great King Moloch that undid them. He appeared among the city with but one of his legions.  He toppled their high towers, gored their great sorcerer-kings, and then when all this was done he rent the earth with his great horns and pooled the blood of his victims in the Blood Red Sea. Thus was the greatest city of men destroyed.

But there are some, mostly elves, dwarves, and others who are biased against the greatness of men in the eyes of the Law, who say that these early works were not done by men at all. Acheron, they say, was the product of a different race, long destroyed.  On the few occasions when they can be called upon to name this race, they call them the Star Lords - likely an allusion to their mastery of the heavens.  Those beings more long-lived than men say this race, if it exists in any form, wallows even now in a hell made for them by Moloch. Surely the men they see upon the world now could not be the inheritors of such mighty sorcerers.


*They were also likely the source of this hideous race, as they became changed by the demonic energies they dealt with.
Posted by Evan at 7:33 PM