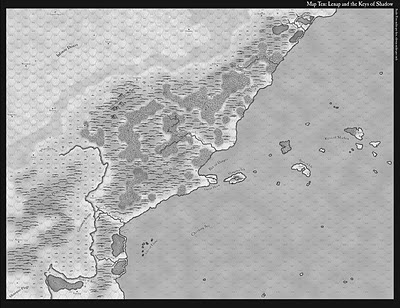 One of the biggest problems I have with making settings is placing settlements.  With Nightwick Abbey, this was easy since I've only detailed a little outside a 25 mile hex.  Since I have conceived Underworld as a Wilderlands style hex crawl setting, I need to give a bit more thought to where settlements should go.

I'm in no way interested in realistic ecologies and demographics.  This is a setting where a giant sun "winks out" each evening and where dinosaurs and mad sorcerers wait in steamy, jungle ruins.  However, I need to determine certain demographic procedure -- for lack of a better term -- so that players can make informed decisions about how they're going to explore this lost world.

The problem I see with tackling this bugbear is that the Underworld is trying to do several things at once.  On the one hand I love the idea of decadent city states ruled by terrible sorcerers of strange cults, on the other hand the cultures that exist in the setting see it as a "new world."  Ilion was founded by a group of shipwrecked Trojans and their wives, so depending on the amount of time between that founding event and the star of the campaign, there might not be enough of a society to support decadent magicians and their carnal desires.

The Underworld is a land of battling city states and howling wilderness.  How do those city states support themselves?  My conception has always been that Ilion and Aram focus themselves around a chief great city and possibly the minor villages that support them.  Who do they trade with?  How are they as big as they are?  I'm wary of breaking up these civilization into different city states because this waters down some of each city's identity.

Then there is the question of what to do with the lost civilizations that are already in the Underworld.  I want to have mole men, morlocks, Atlanteans, Lemurians, Mu men, dinosauroids, lizard people, and so on with their own ruins and gods and sorceries.  How do they interact with the cultures the PCs are from?  I could solve some of my problems by saying that Atlanteans integrated int Ilionian society, but that removes much of their mystery and horror.  These creatures represent a sort of localized "orcs" in my campaign world, and I am loathe to humanize such beasts.  I don't like "moral questions" in my game because all they serve to do is make players uncomfortable.  I want action and adventure, not philosophical debates on the nature of evil.

Commenters on previous posts I've made have noted that these issues don't really matter much to the player.  By and large this is true, but the implications on play are great enough for me to take this issue into consideration.  Since I'm wedded to the hex map set up, players will want places they can resupply before trekking out again into the savage wilderness.  I have to define the nature of these places and make sure each one is unique but not completely oddball.  This is a tall order.

I'm not sure what to do about these issues, and they're one of the primary reasons that I decided to use Nightiwick Abbey and its world instead of the Underworld for my fantasy gaming.  I love the concept of the Underworld, but I have a very hard time with the execution.  I'm interested in seeing my readers thoughts on these and other issues.

Expect to see quite a bit of Underworld material this week.  I recently watched the MST3k episodes Hercules and the Moon Men  and the Mole People, so I have lost worlds on the brain right now.
Posted by Evan at 1:21 PM

Email ThisBlogThis!Share to TwitterShare to FacebookShare to Pinterest
Labels: ramblings, The Underworld