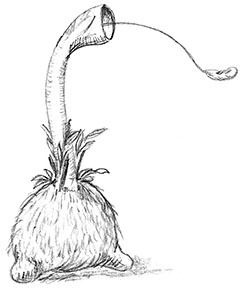 Driffits are deceptively hostile plant creatures who feed on decaying animal flesh.  Scholars say that these odd creatures were created by a now lost race as a cash crop; however, few believe this as no one would be insane enough to think they could harvest these horrid things.  They resemble a large barrel with a blunt, tripod appendage at the bottom and a pitcher plant springing forth from the top.  Hidden inside this pitcher plant like appendage is a 10' long retractable stinger, not unlike that of a jellyfish.

In addition to taking damage, anyone stung by a Driffit must make a Saving Throw or perish instantly.  The creature then will stay next to the body, sometimes for months, removing flesh and pulling it into what can loosely be called its mouth.  They have a shambling gait and tend to lurch forward slowly and spasmodically.  Most Driffits reach a height that is a little over 7'; however, in certain tropical climes they have been known to reach as tall as 60'.

Some believe that they are highly intelligent.  Their barrel-like body is covered with woody twigs that they use to constantly pound on themselves.  Those who believe they are sentient think this is a primitive, or perhaps even advanced, form of communication.  Most just find it annoying.
Posted by Evan at 8:48 AM