Race as Class, Race Plus Class, and Racial Classes 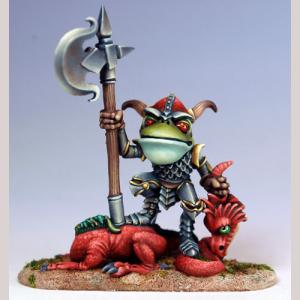 Regular readers of my blog will no doubt know that I have acquired a rather bizarre set of races for the Dark Country.  While it does have Dwarves and Gnomes, both are slightly (or drastically in the case of Gnomes) altered.  The other races are Changelings, half fairy creatures who replace Elves, and Froglings, drunken amphibian merchants from my campaign's equivalent of the Netherlands.

When I originally conceived of the Nightwick Campaign, I pictured using these races, though Gnomes and Changelings did not exist at the time, as other races are in OD&D: they can level as a fighter or a thief and get a few extra abilities based of their race.  When the decision was made to switch it over to Labyrinth Lord, I decided to stick with the Race as Class dynamic familiar to all those with experience using OSD&D.  This was primarilly done for simplicity's sake.  I know of a number of systems for desiging B/X/CMI classes, but I know of none for desiging AD&D races.  For that matter, Labyrinth Lord defaultly uses race as class and only with the advent of the AEC, which I only purchased recently, did it have the option to split race and class.

However, the longer the Nightwick Campaign goes the more I find myself using my 1e books.  I've primarilly been using them for dungeon stocking since I like the wide array of systems and monsters availible within those tomes.  However, I've also been contemplating using more of the classes from the AEC/AD&D.  The player of Barley Brownbeard almost made a ranger instead of a Dwarf using the AEC, and I would've let him.

In light of the increasing AD&D-ness of my campaign, I am left to wonder what I should do with the various demi-humans that putter about the Dark Country.  Some of them, like Dwarves and Froglings, would lend themselves well to having different classes.  Dwarves worship the God of Law, though their practice differs from human worship, and I'd desperately love to have Fighting Frogs like that fellow at the top of the page.  Others are tougher to figure out.  How do I deal with Changelings' inherent magical ability or Gnomes' alien psychology?

I'm not sure what the answer is yet, but it may lie in combining the various approaches.  Perhaps Dwarves may enter some of the classes currently available to humans to a limited degree, while Froglings and Gnomes have classes specific to themselves and Changelings are just Changelings.  This of course depends as much on the preference of my players as it does on me, so I'll have to posit this to them.
Posted by Evan at 7:22 PM