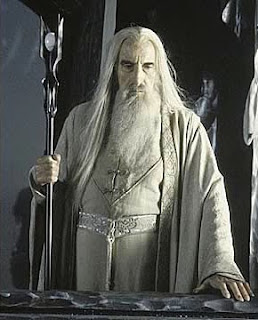 In which I learn a valuable lesson: don't roll on the magic item tables.

Last session, the players stumbled on quite a bit of money.  They were eager to spend it, but since the winter had essentially shut down all non-subsistence based economic transactions in Nightwick village, they decided to brave the roads and strike out towards Lichgate.

Before leaving they recruited a few hirelings and one henchman (an apprentice for Professor H'oak).  They set out on their merry way, and soon found an overturned wagon blocking the road amidst a wooden copse.  They suspected an ambush, and quickly surmised that bandits had set up this little road block.  Ma'ongo decided that it would be best to negotiate with them and join up with the band of robbers.  Confused by this, the robbers only agreed to let the heavily armed group of characters pass.  Negotiations quickly broke down, and Ffraid used the spell command to cause a bandit hiding in a tree to fall into a deep coma.  The fall from the tree caused the bandit to break his neck on impact, and the other bandits scattered.

They managed to make it to a crossroads before needing to camp.  The party then set about gathering the necessary materials to build a temporary shelter and prepare some food.  They did this quickly and mostly effortlessly (though Barley Brownbeard brought a bunch of rocks back instead of firewood).  They assigned watch shifts and then settled down to sleep.  During Ma'ongo's watch, he spied a number of torches lit on a nearby hill.  He awoke his party members and they quickly discovered a very large patrol of orcs was bearing down upon them.  They decided to flee, and easily slipped by the dim-witted creatures.

A small rules note:  I used the evasion rules from the RC for this.  It's one of my favorite parts of that book.

In the morning they continued on, but while passing near a small bog they were attacked by 15 hobgoblins.  The party and the hobgoblins traded bow shots, both taking heavy casualties.  Eventually the party was victorious, slaying every single hobgoblin (they made great morale rolls), but Ma'ongo was a bit disappointed by the battle.  He had elected to charge the three rounds it would take to get to them, after shooting off a few arrows, but arrived the instant the last one bit the dust.

Nearby the found a small, stone barracks.  Investigating it, they found that it was the home of the hobgoblins they had so recently slain.  In a chest in that shelter they found two swords, of dwarvish make, and two potions.  The two swords were, as Barley surmised, named Dragonfang and Trollcleaver.  I decided to adopt Gygax's method of forcing the party to pay gold for immediate identification of items.  They did this for the two swords, discovering they were a +1/+3 v. Dragons and +1/+3 v. Regenerating creatures respectively.  They also decided to pay for a staff they had not yet identified.

It turns out this was a Staff of Power, capable of creating 8d6 damage fireballs.  The party seems to have a new plan now: loot the cathedral in Lichgate.  We'll see how that goes.

This was the first session that occurred entirely outside of Nightwick Abbey.  My wife was a bit disappointed with the lack of dungeoneering, but the other players seemed to enjoy themselves.  The end of the session reminded me of a Knights of the Dinner Table comic, with the players planning mayhem that may or may not burn down a considerable amount of the world I've made so far.  It'll be interesting to see how this pans out.

Edit: I forgot to mention that all of the hirelings and Professor H'oak perished in the battle with the hobgoblins.    Also, Slimey got knocked down to 0hp, but the house rule from the RC saved him.
Posted by Evan at 4:33 PM