I've been working on some conceptual maps for the Underworld, and I think I've hit on a way to represent farmland on a Mystara style map.  Here is a small map centered on the city of Akham (formerly Khemia) in the Underworld. 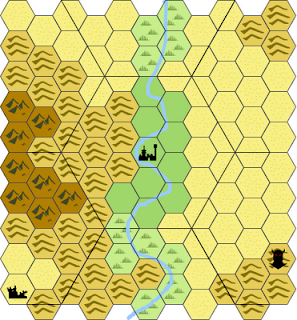 click to embiggen
Here we have a desert region that is made fertile by the presence of a river system.  In this case, the area within a day's walk of the city of Akham is utilized regularly for agriculture.  This is represented by the solid green hexes.  Other areas are fertile (grasslands hexes) but are not utilized in this manner.
Here is my campaign map after I've given it the same treatment: 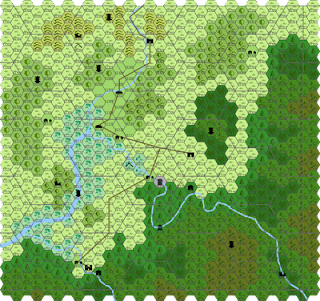 click to embiggen
It this case, the region near the two trade towns -- the southernmost one being Lichgate (whose spelling I really need to codify) -- is settled rather heavily with small farmsteads.  Villages only utilize the immediate surrounding area for farming, but due to their size and lack of armed men they are unable to claim the other hexes from the wilderness.  In general these settled areas are peaceful, but a cursory glance at the map will reveal that a few monster lairs are quite close to some farmland.  I imagine those poor souls are rather used to raids.
While obviously not as detailed as Rob Conley's method, I do think it adds something to the maps.  Now, do I want what it adds?  I'm not sure yet.  Theres something to be said about the phantasmagoric unreality of a D&D world consisting of nothing but huddled villages and terrifying wilderness.  I've been thinking about maps a lot recently, so expect some more posts on the subject too.
As a last note, heres a shout out to Jim of Carjacked Seraphim who happens to share my birthday.  Happy birthday Jim!
Posted by Evan at 8:22 AM