Alignment and the Underworld take 2 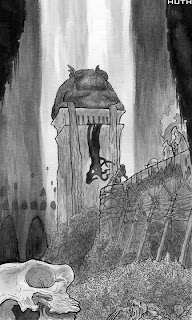 art stolen from the awesome Chris Huth
I've discussed before my problems with incorporating D&D's alignment system into the Underworld setting. Yesterday, rather serendipitously, I believe I stumbled upon an answer.

There is no real "metaphysics" in the Underworld.  It exists in the science fantasy world of pulp fiction.  It is, in some sense, akin to the "Cthulhu mythos" with its super powerful aliens masquerading as deities.  These beings exist on Earth before the dawn of human civilization, and therefore exist in the land of things that were but are no longer.  Now they slumber in the mountains and seas of the Underworld, waiting for the unwary to awaken them.

But some have already been awakened.  There are those among these alien beings who see mankind as a boon, and when humans came to the shores of Atlantis they made themselves known in their own peculiar ways.  For these entities, mankind is a source of food.  However, they utilize humans like a farmer utilizes his crop.  In exchange for sacrifices, the "gods" give humans the ability to maintain civilization.  The Underworld is a metric shit-ton more dangerous than the ancient world of Earth, and the help is appreciated, regardless of the price.

Other such entities exist that are not so fond of mankind.  Unlike their brothers and sisters, they are not content for the occasional meal.  Why provide services for humans when they could just devour them.  These god-like powers, which men call demons, seek to pull the whole universe into their slavering maws.  They can think in the long term, however.  Many form small cults to undermine the power of deities so that mankind will be more vulnerable.

In game terms, these two groups are lawful and chaotic respectively.  Most other creatures, including most people, are neutral.  This means they're more or less out for themselves rather than the furthering of civilization or the feeding of demons.  Players may still pick which alignment they are.
Posted by Evan at 1:44 PM

Email ThisBlogThis!Share to TwitterShare to FacebookShare to Pinterest
Labels: campaign design, The Underworld