Stocking a Postapocalyptic Sandbox and a Map

These Charts more or less utilize Welsh Piper's Campaign Hexagon System, but are more tailored to Postapocalyptic nonsense.  If you're using Gamma World or Mutant Future, you might want to stick to the basic ones found on his site.  These are intended for games where technology has not quite devolved that far. 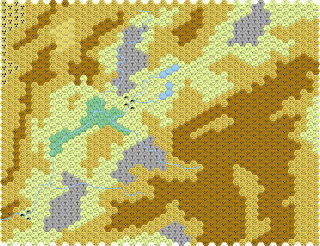 click to embiggen
This map is what I hope to use the stocking tables with.  I've already determined the number of minor and major encounters, I now just have to figure out what they are.
The map itself is based off of East Tennessee and the surrounding areas.  Each hex is roughly 10 mi, but the spacial representations are not entirely accurate.  The two ruined metropolises are Knoxville (my current place of residence) and Chatanooga.  It supposes a nuclear war, followed by a nuclear winter, followed by a nuclear summer, followed by global climate change ending in what is more or less an ice age.  Sprinkle on top of that massive pre-war pollution and you have a cold, acidic hellhole of a place.  Still it's better than what's to the West of it.
I'm still looking for a system to express this setting in, but I hope to have one soon.  I'll probably steal the premise of the Morrow project even if I don't use the rules, though with slight modifications of course.
Posted by Evan at 1:46 PM