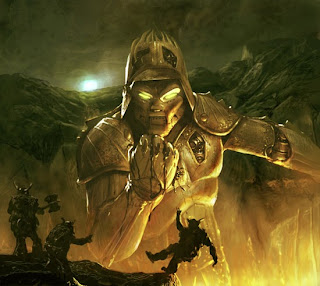 The party, sans the Phutian whose player was unable to make it, began their adventure from the Whore's Nose.  Keret elected to spend a few weeks resting and forging himself a new pair of khopeshes in the temple of Kothar, the Key and the Gate.  Meanwhile,  Belit, priestess of Li-Lit, sought to create a congregation of Li-Lit worshipers within the heart of Almodad.  You see Almodad is the hated enemy of the Jerites, and the religion of those warrior women is forbidden within it's walls.  Now that she had access to the cellar of a (pseudo)abandoned building she could build a cult in secret.
There was a metagame reason for this as well.  Those of you who've read my write up of the Priest class will know that they can only regain spells by praying at a shrine that has been dedicated to their deity.  Since Belit was in a city where her religion is proscribed, she was up a creek without a paddle.  I had not yet developed any mechanics for making a shrine, but ruled that she needed to find at least five members of a "congregation" and then she must perform a ritual involving the sacrifice of a man.  After a few Charisma checks, reaction rolls, and the finding of a drunken guard she had met all the requirements.  She performed the ritual, along with her five parishioners beneath the Whore's Nose.  She then performed the necessary rituals to regain her spells per day.
These events took a couple of weeks, but afterwards the party hooked up with a trade caravan heading to Uz.  They were offered a few bits of coin if they were able to fend off any potential attackers.  While on their way they were assaulted by a number of strange humanoids with metallic blue skin and a strange, white fluid instead of blood.  They rode giant, albino lizards and two of them utilized metal rods that shot beams of crackling blue energy.  Still, they were susceptible to sleep (though it required both Belit and Lott to cast the spell) and thus easily overcome.  Unfortunately, the shock of the strange weapons had caused the rest of the caravan to bolt back to Almodad, taking the party's camels with them.
Keret then attempted to tame one of the albino lizards (the only one he was able to catch before they all scattered).  He failed to break the creature, but where he failed Belit succeeded.  They now had a -- rather large -- mount.  They continued down their path heading into the purple hills.  There they fled from a number of spitting lizards, and a few zombies that guarded the City of the Dead.  At last they made it to Uz as the red sun sank over the purple hills.
Once inside the city, they immediately noticed that portions of it were in ruins.  They asked a guard what the problem was, and he informed them that a number of statues had exited the undercity and began laying waste to the town.  They seemed to be the guardians of the body of Uz of Uz, First King of Uz.  These statues had a sacred duty to protect the body, and the guards were not permitted to interfere with their search.  He also explained that the statues were irreplaceable since their secret of their construction had been lost.
After this conversation, the party heard the footsteps of an oncoming statue and fled the city.  They returned to Almodad to retrieve the "statue" they had stolen, which was actually the embalmed body of the king placed in an electrum mixture.  Returning to the shady smith's house, they found that he had apparently died after shaving off a bit of the electrum and exposing the skin of the corpse.  His body was completely desiccated which caused the party to be extremely careful in handling the king's statue.  Keret used the blacksmith's equipment to heat the electrum and reapply it to the statue while the rest of the party rummaged through the shop for whatever goods they could acquire.
Keret then expressed that he wished to use the statue as a weapon, believing it would attract the animated guardians to wherever it lay.  Belit wished to return the statue (since her player just wanted to go back to exploring the undercity), and Atos the Ilionian and Lott the sorcerer went about their own business.
Both sought a way to pay homage to their deities.  Atos found a shady dealer in an otherwise abandoned market place who offered to sell him a cobra (a creature needed for the most sacred rite to honor Apollo).  Rather than purchasing this, Atos merely killed the merchant and carried off the basket that contained the snake.  He then purchased a goblet of wine.  Finally he forced the snake to bite the glass and infuse the wine with his poison.  He drank the resulting mixture, and a successful saving throw revealed that he had the favor of Apollo.  Note: this was borderline insane for a first level character, and he barely passed.
Lott on the other hand needed to honor Mot, also known as He Who Pulls into His Gullet or the Charnel  God.  He found a homeless man who he lured into the now vacant blacksmith's shop.  Once their Lott slit his throat and burned the body sending it (spiritually) to Mot's great maw.
They then continued to debate what to do with the statue, but play more or less stopped.  I'm not sure what to make of the fact that my players seemed to take to human sacrifice so readily.  Also, I may need to up the requirements of making a shrine if it took so little time.  Still, a fun session and I look forward to the one I'll hopefully run this evening.
Posted by Evan at 6:33 PM