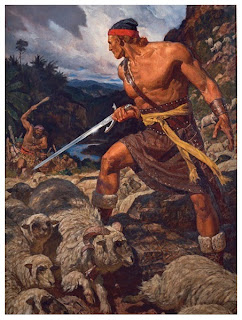 I'm currently in my home town in Mississippi for a short vacation, and I wanted to work up a game for some of my old friends.  I hinted at this earlier.  At that time I thought I would be using the Underworld setting for these few sessions as I wanted to test some of the mechanics, classes, and monsters I'd been developing.  However, certain factors led to my developing a new setting based around the map I posted last week.  This setting has no name at this time, but the central city of the setting is called Uz, the First City of Men, and that seemed like an appropriate enough title for this post.

This milieu takes place on a far future Earth where a highly technologically advanced society suffered a catastrophic calamity that plunged it into barbarism.  At the time play begins, mankind has just dragged itself back into the Bronze Age.  I described it to my wife as "the Old Testament as written by H P Lovecraft."  In all honesty it is much closer to Clark Ashton Smith's Zothique cycle, but my wife hasn't read that.  Anyway, most of the cultures are very, very, very loosely based off of civilizations of the Ancient Near East, such as Phoenicians, Babylonians, and Sumerians.  There are also some fanciful elements such as a society of warrior women and a host of Morlocks.  Ilion also exists somewhere off of the map, since one player wanted to run a Greek character.

Most of the monsters exist because of genetic engineering in the previous eons before the rise of Uz, the first city constructed after the Deluge.  Magic exists most likely due to some sort of sciencey-wiency reason that I don't care about right now.  Thats enough about the setting.

The party consisted of :
Sheikmar of Phut -- a Phutian (kinda-sorta Phoenecians) Warrior and devout worshiper of Dagon
Belit -- Jerite (from Jerah, City of the Warrior Women) Preistess of Li-lit
Keret --  Warrior and worshiper of Kothar from Almodad, the Jewel of the Desert
Lott -- Magician of no particular religious affliation, also from Almodad
Peleus -- Ilionian lackey of the sorcerer Ajaxos (more on that later)

The party (sans Peleus) arrived at the gates of Uz just after nightfall.  After paying a small tax they were allowed into the city by the guards at that gate.  They found themselves in an impoverished and crowded district, and quickly set out to find a tavern or inn.  Inside the Red Fish tavern they found a number of locals drinking and discussing business over the teal wine of Ilion.  One of these men, a black robed figure named Shamir, approached the party after seeing the depths of their drunkenness with a proposition.  He took them to the palace of his master, the sorcerer Ajaxos.  (My wife compels me to note that it was a "ramshackle mansion" "in the ghetto."  Admittedly it was not in the best part of town.).

Ajaxos, after berating a slave boy, told them that he sought a strange item: the Fuel-less Fire from the temple of Moloch!  He asked the party to sneak into the undercity and bring it back to him post haste.  For this purpose he gave them a small censer to contain the flame.  He sent with them a lackey, Peleus (whose player had just arrived), and off they went to capture this strange prize.

Ajaxos had outlined two methods of entering the undercity that would take them close to the area beneath the temple of Moloch.  They chose to enter through a chute on top of a large platform near the center of the city used for rites honoring Uz of Uz, First King of Uz. Despite the late hour, four blind fanatics protected the chute.  Lott used his sorcery to place three of them in a deep sleep, and the party disposed of the other one quietly.  They then threw the bodies down the chute, which ended in a rather bloody mess.

The party lowered themselves into the room beneath the chute by means of a rope Lott had provided.  Once at the bottom, they discovered the chamber was a large tomb adorned with a -- now gore covered -- sarcophagus and a number of large, stone statues.  Keret relieved one of the splattered corpses of their kilt and put it on, despite the blood stains.  The other party members pried open the sarcophagus only to find that no body lay inside.  Instead, there was a small electrum statue resembling a Uzite king.  They decided not to take the statue unless they found no other booty and headed down a passage to the South.

In this passage they found two horrible creatures that resembled combinations of men, vultures, and hyenas. Readers of this blog who have read the Clark Ashton Smith story "The Tomb-Spawn" will know them as Ghourii.  The party slew these quickly, though not without some loss of hit points.  They continued on until they discovered a fork in the passage.  They elected to head down the one which, if their recollection was correct, would lead them closer to the surface structure of the Temple of Moloch.

They reached a large chamber which lay beyond an archway that possessed no door.  Within this archway was a strange trap that utilized technology long forgotten by the men and women of Uz.  When Keret passed under the strange device, a strange, red beam shot through him.  Though he survived, his armor, weapons, and other metal possessions turned into a viscous, white goo the party was unable to recognize.  Peleus attempted to destroy the triggering mechanism first with arrows, and then with his spear.  He did succeed in breaking it, but this caused red lightning to burst forth before the system finally shorted.  The strange energy destroyed Belit's equipment and reduced Sheikmar and Peleus to piles of bubbling goop.  At this point, the remaining three decided that discretion was the better part of valor and returned to the chamber containing the electrum statue.

They made an impromptu grappling hook out of a few bits of Lott's equipment (since he was the only party member with any form of metal on his person) and tied a rope around the statue.  Lott remained at the bottom while the others climbed up in order that he might make sure that the statue would not slip loose of its bindings.  As soon as the statue was lifted completely off of the sarcophagus, every statue in the room sprung to life and attempted to reach Lott.  Luckily for him, Belit and Keret were able to lift him out before he could be slain by the stone guardians.

They then began to wonder how they might sell such an obviously pilfered item and made there way to the docks which peppered the River of the Gods.  After they hid the statue in one of the character's backpacks they payed for passage by boat to the nearest city by river (Almodad).  Keret had to barter for his and Belit's passage using tulwars he had lifted off of the fanatics' corpses before climbing out of the tomb.

They arrived in Almodad the next afternoon and immediately set about trying to find a smith of ill repute.  It turns out that (after a successful Charisma check) Lott knew of such a man and they headed into his warehouse.  Along the way they bumped into a Phutian who claimed to be looking for his good friend Sheikmar.  He followed the party, much to Keret's chagrin.

At the blacksmith's shop the party exchanged the idol for some gold that they then used to purchase some new equipment.  Belit also let the Phutian know that Sheikmar had met a strange end in the undercity of Uz.

The party then wished to find an inn to stay the night.  They found an establishment called the Whore's Nose, which happened to be in the middle of a robbery.  The player of Peleus had made a character (yet unnamed) but had not yet had a chance to rejoin the party.  The exact exchange went something like this:

Keret's Player:  "We look for an inn."
Me: "You find one called 'the Whore's Nose.'"
Peleus's Player: "I rob it!"
Me: "You see an Ilionian emerge carrying a comic money-sack with a dollar sign on the side."

Keret attempted to subdue the thief, at which point Lott picked up the sack and began running down the main thoroughfare of the city.  Belit followed, and guards gave chase.  The morbidly obese innkeeper then arrived at the door.  Keret attempted to gain some boon from his capture of the thief, but his new Phutian ally punched the innkeeper in the face.  This caused the woefully out of shape man to suffer a fatal heart attack right there in the street.  Keret then weaseled a few coins from a guard before "accidentally" letting the Ilionian escape.

Lott and Belit (and now the Phutian) continued to attempt to evade the guards.  Since night was oncoming, they were able to find a -- mostly -- abandoned market square into which they lured the guards.  Belit sent their pursuers into a deep sleep, and Lott and the Phutian set about cutting their throats.  Shortly thereafter a few more guards arrived, but Lott had prepared sleep again for that day and they were no match for his magic.

Meanwhile, Keret entered the Whore's Nose to gain some favor from the innkeeper's wife.  She was a voluptuous woman who was elated to discover that her fat husband had croaked.  She immediately began loading everything of even remote value in the inn into a large sack before heading out into the night.  Keret then looked around to see if she had missed anything, but only found a number of large wineskins filled with the teal wine of Ilion.  He somehow alerted the party members to his location, and the session ended with them regrouping at the Whore's Nose.

A few notes on the mechanics: I used the Swords & Wizardry White Box with a few house rules and treasure tables borrowed from Labyrinth Lord and the LBBs.  The monsters were almost completely homebrewed, and the traps were derived from those in Sham's Dismal Depths project.

The map I was using for the undercity was fairly large (a full page of graph paper at 10 lines to 1').  I had stocked some of the Saturday Night specials before hand.  When I say Saturday Night specials I do not mean the "tricks" outlined in the LBBs but rather the sorts of complexes MAR Barker discusses in EPT.  EPT was a major influence on this setting, even if most of the particulars are wildly different.  I was going to stock the rest of the dungeon as we went, but the players never made it out of the initial tomb complex for me to try that out.  I'll hopefully be able to work up some generic encounters to place as we go before the session tonight.

For the city parts of the session I used Zak's urbancrawl system.  This might be my favorite thing to ever come out of his blog.  I still need to work up such a map for Almodad, but the one for Uz has already become fairly complex.

It is unlikely that I will continue to work on the Underworld as this setting fills much the same niche but comes with less difficult questions to answer.  While I'm sure I'll miss the whole Hollow Earth thing, the far future can be fun as well.  Especially if you have an excuse for dinosaurs, a red sun, and "meat" animals.
Posted by Evan at 9:00 AM