A Fistful of Denars...

...or if you prefer, Once Upon a Time in the Lauragais. 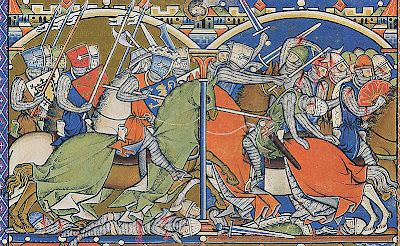 I recently played in Zzarchov's Neoclassical Geek Revival game on G+.  It takes place in a highly fictionalized version of medieval Europe -- the party was currently in Ireland -- and oddly enough that meant Philip the Black of Luxembourg merely had to get on a boat and cross over from Wessex.  After playing in both of those games I noticed something odd: the historical background allowed me to picture the setting more easily even though they both included fantastical elements.  This is even more remarkable in Jeff's Wessex game since I'm still able to picture the physicality of the setting despite football-helmeted goblins and what I can only assume are travelers from Carcosa.

These two campaigns have inspired me to think about how I would use a historical milieu for D&D.  I'd already been thinking about setting a campaign in Southern France, and so I decided to shift the focus away from the Hell-Caverns and towards the Wilderness that surrounds it.  Occitania, a region that contains much of Southern France, will be the broad canvas on which I will paint my milieu.  During the middle ages -- and to a lesser extent today -- Occitania was separated from the Ile-de-France by language and custom.

The time period I would most want to highlight is the Albigensian Crusade.  Depending on which scholar you believe, the crusade was either an attempt to dismantle the various heretical movements in southern France, an act of genocide, an attempt by the northern French to gain territory at the expense of their southern neighbors, or some combination of the three.  This period provides a macro-level event that I can use to give the events in the campaign context.  It also provides the violence necessary for an action-adventure game like D&D without either falling into the trap of being too chaotic or of having the sides remain too stable.  Players, assuming they want to become involved, can either through their lot in whole hog with one side or the other or they can play both sides against the middle a la Yojimbo.

It also provides niches for NPCs.  Fighters and Specialists (since I'll likely be using LotFP) are mercenaries, brigands, and war profiteers who have come to the Lauragais to make their fortunes.  Clerics can be inquisitors, mendicants, or possibly even heretics trying to win support for their side.  Magic Users I'm especially happy with.  This period also marks the emergence of nigromantici (black magicians) in medieval literature, and in a story related by Caesarius of Heisterbach we see a necromancer summon the devil to help root out heresy.*  Some will possibly point out that these characters can be put in any setting if I'm willing to make it fantastic, but it's nice to have "historical precedents."

I want to give the setting a bit of a Spaghetti Western flavor, only with dungeons.  Luckily, parts of southern France are scrubby enough to look like a Fistful of Dollars.  They may not have looked this way at the time, but mood is just as important here as history.  This brings me to a potential problem:  I need some way to divorce the setting from actual history in order to make the way I interpret facts for the game separate from history.  This is necessary in order to add in the fantasy that comes along with D&D and also to avoid offending anyone who has strong feelings about the Cathars -- you'd be surprised how many people that is.  Jeff Rients did this by a fictionalized version of south western England invented by a Victorian novelist.  Sadly, I don't know of anything like that for Occitania. 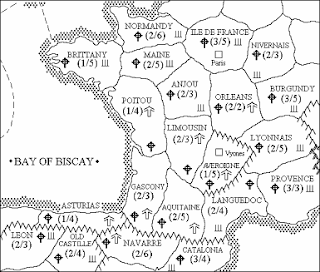 Those with a knowledge of French geography or the  fiction of Clark Ashton Smith will note that Averoigne has replaced Auvergne.  If wikipedia is correct, CAS actually based Averoigne off of Auvergne.  While Auvergne is not where one thinks of when one thinks of the Albigensian Crusade, it might make an interesting frontier area.  Simon de Montfort or one of his emissaries could use Vyones as a staging point for campaigns further south and Gaspard de Nord could be impressed into hunting heretics in Toulouse or Carcassonne.  This would obviously allow me to add in more fantastic elements since they are already present in the setting.

I may not use Averoigne, since it would be away from most of the actual action of the war, but it is a thought. I would like to have Toulouse, Carcassonne, and Narbonne be on the campaign map, but I think Vyones might deserve a place as well.  I wouldn't be surprised if you see more posts on this idea soon.

EDIT: had to change the link to the Danzig interview I have up there because I had accidentally used a "humorously" edited one that actually completely undermined the humor of the thing.
Posted by Evan at 5:58 PM