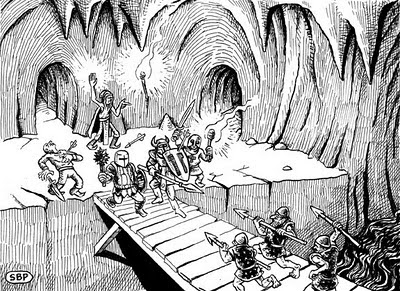 Since I did a pitch for the Wild Lands, I thought I'd do one for Treasuredeep.  I originally made to test out the excellent "game" How to Host a Dungeon.  My wife gave me the name.

The premise: Many dwarf years* ago, a clan of dwarves sought to build a great hall in a land they knew to be rich in mithril.  For many years they toiled in the rock, and from the ore they made many wondrous items and fabulous treasures.  Under the Hammerhand kings the dwarves of Treasuredeep entered a golden age.  Songs from this time are still sung by dwarves everywhere.  These songs tell of great battles against the goblins, of magic swords of terrible power, and of large-breasted mustachioed dwarven maidens.

They also tell of the sad fate of the Hammerhand dwarves.  It is said that one day while expanding their hall, the dwarves tunneled into a series of caves that housed the Wyrm as Old as Time.  It slew many dwarven warriors and drove them from that section of their mine.  In the many years that followed, the Hammerhands led campaign after campaign into the caverns in a desperate attempt to win back the treasures of their fathers and to slay the Wyrm for good and all.  Alas none where ever successful, and it is said that the last members of the house of Hammerhand who were still alive led a suicidal charge into the dragon's den, never to be seen again.

In the time since, the Realm of man has spread over the surface, and the races of dwarves and elves have slunk to the dark corners of the world.  Now a town of men lies near the most famous entrance to the abandoned mine.  Rumors say that the Wyrm as Old as Time has slept for the (human) centuries since it ate the last king.  They also say that new residents now lair in the old mine, and they are much less friendly than dwarves.  Still, if legends are true their is a fortune in that old mine, and you're just the PCs to get it.

How this works:  This one would be much closer to Myrddin in design.  Each session is a discrete delve into the dungeon with a randomly selected party roster.  The dungeon itself would be a mixture of geomorphs and my own hand drawn maps.  Most areas will have a definite theme determined by the results of the How to Host a Dungeon game.

Like the Wild Lands, this campaign concept is vaguely inspired by the Hobbit; however, I think this one would be a bit more gonzo.

I may work up a similar pitch for Nightwick abbey, but I imagine most of my readers are familiar with that dungeon.  In session format, it would more or less work the same way as this one.

* dwarf years are much longer than human ones and are based on tectonic processes rather than the movement of the sun.
Posted by Evan at 4:29 PM