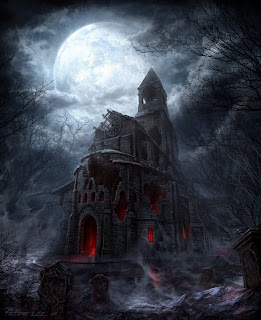 Nightwick Abbey has lain in ruins for almost two centuries.  Built by power hungry knights and mad wizards, it now is home to only ghosts and goblins. Peasants refuse to work in the shadow of the ruined church, and at night eerie lights issue forth from its depths.  Many have tried to wrestle gold from the crypts which lie beneath, but few have returned.  Are you brave enough to seek your fortune in a demon-haunted dungeon?
A ConstantCon game using the Lamentations of the Flame Princess: Weird Fantasy Roleplaying rules.*
Play will be from 2:00 - 4:00 PM EST every Saturday.  The end time is somewhat flexible, but I'd rather not go longer than two and a half hours.


I'll be determining the party composition randomly.  If you would like to be added to my list send an email to evanDOTvanDOTelkinsATgmailDOTcom.  I would like to begin play on the 12th of this month, but I may have to postpone it until the 19th.


This is a FLAILSNAILS game.  If you have any questions or need help converting your characters, let me know.


I decided to go with Nightwick because I have material already made for it, and thus it will be less work for me.


* A free version of the rules may be downloaded here.